"Do the Right Thing"

“Give me your tired, your poor, your huddled masses yearning to breathe free. The wretched refuse of you teeming shore. Send these, the homeless, tempest-tossed to me, I lift my lamp beside the golden door!”

~We should build bridges instead of fences. Our nation was built by immigrants. Every time we have limited immigration, we have suffered because of it.  We should live up to what it says on the statue of liberty. tmf
Closing our doors to those who seek freedom is wrong: 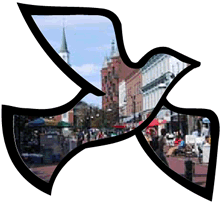 With conquering limbs astride from land to land;

Here at our sea-washed, sunset hates shall stand

A mighty woman with a torch, whose flame

Is the imprisoned lighting, and her name

Mother of Exiles. From her beacon hand

With silent lips. "Give me your tired, your poor,

The wretched refuse of your teeming shore,

Send these, the homeless, tempest-tost to me,

I lift my lamp beside the golden door!"

Here is some commentary which expresses the idea of open borders rather well:

"Do the Right Thing"

Since 2008, there seems to be a feeling that the United States is in decline, that a great stagnation has set in, that Americans’ customary optimism is obsolete. One antidote to this (decline) can be found in the ideal expressed on the Statue of Liberty:


Give me your tired, your poor,
Your huddled masses yearning to breathe free,
Send these, the homeless, the tempest-tossed to me,
I lift my lamp beside the golden door.

That famous poem remains part of American patriotic mythology, even after a hundred years of immigration restrictions have been betraying it.

Of course, it is not the first time that an American ideal has remained latent for generations. Americans took pride in the Declaration of Independence’s valiant pronouncement that “all men are created equal” through generations of slavery and segregation. At long last, though, the dream won through. So there is hope—including for those tempest-tossed beside the golden door.

Nathan Smith is the author of
Principles of a Free Society.
He blogs at The Free Thinker.
http://openborders.info/nathanael-smith/

Posted by Writingresource at 6:53 PM

Let us know what you think!